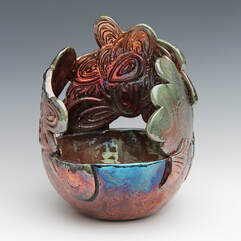 RAKU-FIRED WARE
Raku ware is a type of Japanese pottery traditionally used in Japanese Tea Ceremonies dating back to the 16th century. However, Raku techniques have been modified by contemporary potters worldwide. Reflecting Japanese tradition, my pieces are all hand-built (rather than wheel-thrown) using pinch-pot and slab techniques. The ware is rapidly heated to a very high temperature and then removed while still glowing hot. Reflecting current modifications of this process, my ware is placed in an aluminum trash can filled with combustibles such as newspaper and wood shavings. A reduction atmosphere is created by putting a lid on the can. The combustibles catch fire and force the reaction to pull oxygen from the glaze and the clay minerals. This leaves an iridescent luster and creates a metallic effect on the ware. Parts of the ware that are unglazed will turn a smoky black. The ware is cooled, then cleaned, and sealed afterwards. Because this process is so unpredictable, many find it frustrating. I find it to be both exciting and surprising. Each piece is one-of-a-kind. May you enjoy the raw beauty of Raku as much as I do!

(*Do not eat or drink out of raku ware) 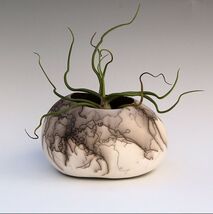 CREATING HORSEHAIR POTTERY
After handbuilding my pot and letting it dry out until it’s nearly leather-hard, I paint on a coat of Terra Sigillata and burnish the surface with a soft cloth. The application of the Terra Sigillata prepares the unglazed surface before firing and gives the pot a smooth, silky, bright white surface on which to eventually showcase the horsehair markings. The ware is then bisque-fired.

A second firing, rapidly brings the temperature of the piece up to 1100ºF and I then remove it while still glowing hot. While another person holds the piece steady with tongs, I carefully add strands of horsehair to create the patterns you see. The horsehair burns and leaves a wandering linear smoke design. Thicker horsehair strands leave darker, straighter marks, while finer, thinner horsehair leaves a curly, more delicate mark. Additional designs and patterns can be created using feathers, leaves, or even sugar.

When the ware is cool, I seal it with a wax product and then add a complimentary air plant with delicate tendrils that mimic the lines of the horsehair patterns. Each piece is one-of-a-kind!

(*Do not eat or drink out of horsehair pottery)